On the 11th of november 2013 I had just met a new prospective client with a newly purchased Listed property which had a quirky ‘staircase to no where’ that was a left over piece of history from when it was originally two separate buildings. Today I just finished doing a joinery drawing for the idea I had back on the 11th of November 2013, 982 days ago! Listed buildings take a long time to get through planning, have lots of unknowns and issues which mean plans change and it can be quite stressful for the client and us as designers as well.

The first two years of the project was just developing the brief and negotiation with the conservation officer as to what common ground we could find between the wants of the client and the wants of the planners.  The last year has been developing the design to building regulations again meeting needs of the conservation officer and the client, specifying everything so as builders could tender for the works. Once on site we have an archeological team on site and found some of the building structurally unsound so back to the planners and building regs.

Now most of the structure is done I can focus on where it all started for us, an idea around a ‘stair to no where’.

Hopefully my next update will show the joiners details and then the finished article. 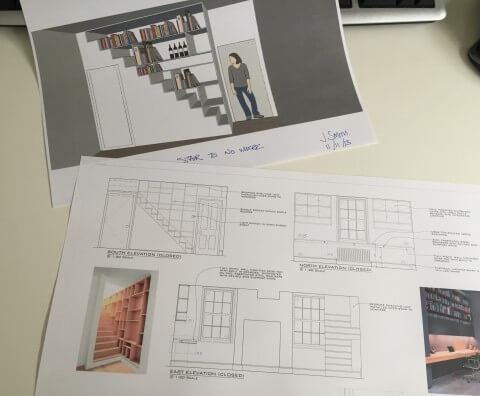 facebook
share
twitter
share
google+
share
pinterest
share
Low Carbon Housing?
Grand Designs Live - "Ask An Expert"
About the author
admin
Related Posts
17 Sep, 15 _ Uncategorized
2015 LUX Awards
An innovative lighting scheme designed by Cityzen was recently entered into the 2015 Lux Awards – the ‘Education & Healthcare Lighting Project of the Year’ category. This lighting award
08 Apr, 16 _ Uncategorized
2018 is coming, is your building going to comply?
Under the Energy Act 2011, from April 2018, it will be unlawful to let properties that fail to achieve the minimum energy performance standard until qualifying improvements have been carried out.
19 Mar, 20 _ News
3 Ways COVID-19 Will Impact On Construction
We are already seeing signs of how COVID-19 will impact the construction industry.
The comments are closed