London Festival of Architecture:
“The changing identity of London communities in the face of rapid urbanisation”

It’s always fun standing up and presenting at an event – experiencing the nerves beforehand and the rush when it’s all over. But this was a bit different. I’d been asked to give a presentation at the London Festival of Architecture about one of our projects – to be delivered mid-way through a panel discussion – for the panellists and audience to discuss and debate. Slightly more nerve-wracking, as the panel included: 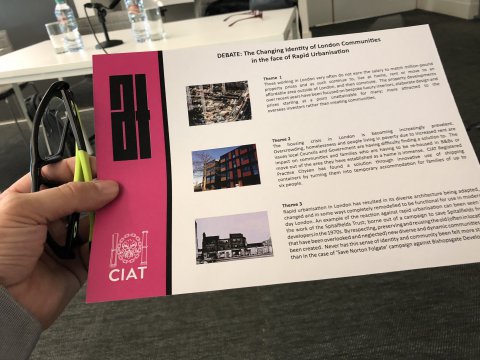 As ever, I’d come prepared with my presentation. Then re-wrote it during the first element of the debate, to capture the mood of the panel and room. Then obviously went off-piste!

I explained that I have been looking at containers since 2005, having written my dissertation on ‘shipping containers as modular building components’ in 2006. Since then I’ve helped various clients with their designs and how to make them work in reality.

My presentation covered Ealing Council’s dire housing shortage, and how they and other councils have to turn people away or ship them out of the borough as there is not enough temporary housing or B&B accommodation (not immigrants or the homeless as we perceive them, but people who are victims of circumstance, families that have broken down, victims of crime or disaster).

I spoke about how, in 2017, we were approached regarding a meanwhile site. ‘Meanwhile use’ is a term we give to a site which has a long term plan for development, but that development is not possible or scheduled until a certain point in the future due to lease or other agreements – meanwhile use can invigorate a disused piece of land and bring about an interim use for that space.

The meanwhile site – Hope Gardens – forms part of Ealing Council’s wider regeneration plan. The land has a remaining lease of 7 years, at which time our client will have 23 days to dismantle the properties, remove the foundations and cap any services. After that the adjacent, ageing tower blocks will be demolished and the whole area regenerated.

I briefly explained that the project consisted of 122 20ft shipping containers, used to create a mix of studio, 1 and 2 bed temporary housing arrangements. Our team was given the project in February 2017, post planning. From there we used the basis of a design we’d produced for another project with Ealing Council, and created a new modular design to fit the site requirements. I described how we worked with two different container fit out manufacturers to get the project on site and keys handed over to Ealing Council, so that they could move up to 288 people in before Christmas. 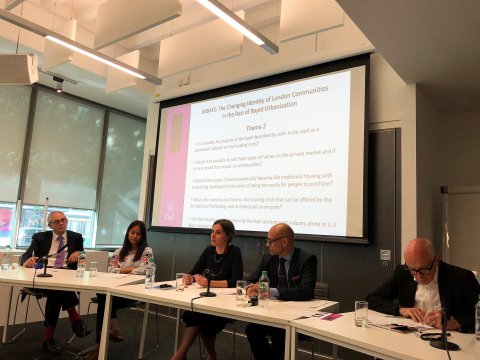 The feedback from the panel and audience was really positive. Everyone understood that containers are not necessarily the be-all and end-all to London’s housing crisis, but one solution to one problem.

The number of social and economic elements to housing is varied, and the debate ended up looking to the future and asking whether some of the big companies will seek to house their workers and how the digital technology we are starting to embrace today is going to change the way we work.

Overall it was a great experience and I was proud to be part of the event. I can highly recommend going to the London Festival of Architecture (on until the end of June) and encourage others to go, keep an open mind, and continue to learn.

If you want to know more about any of the topics above, do drop us an email.

You can also read designWiki’s coverage of the event.

facebook
share
twitter
share
google+
share
pinterest
share
An Introduction To Project Management
Plus Accounting
About the author
john smith
Architectural Technologist, Building Services Engineer Director at Cityzen & Lecturer at Brighton University https://www.linkedin.com/in/johnsmithcityzen/
Related Posts
17 Sep, 15 _ Uncategorized
2015 LUX Awards
An innovative lighting scheme designed by Cityzen was recently entered into the 2015 Lux Awards – the ‘Education & Healthcare Lighting Project of the Year’ category. This lighting award
08 Apr, 16 _ Uncategorized
2018 is coming, is your building going to comply?
Under the Energy Act 2011, from April 2018, it will be unlawful to let properties that fail to achieve the minimum energy performance standard until qualifying improvements have been carried out.
19 Mar, 20 _ News
3 Ways COVID-19 Will Impact On Construction
We are already seeing signs of how COVID-19 will impact the construction industry.
The comments are closed