Listed buildings need TLC, this one more than most!

Recently we have been dealing with another Listed project which has just got to site. It looked ok in the main until we started to look a bit deeper. We had some cracks running up the edge of the building, along what we thought might be the line between the brick and bungaroosh, and knew historically the building had moved.

Initial opening showed that the main spine wall in the property had dropped. More opening up revealed that it was not supported at basement level on anything more than a floor timber, and that was above a door head, and that was above a gas pipe…all holding up 3 floors above and 3 flights of stairs! 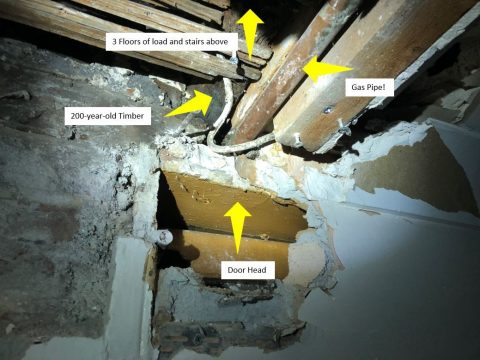 How do we know it was historic? Well the UPVC windows (that were installed without Listed building consent) are in the original timber frames, and these are nowhere near square. See left to right at the bottom of the window frame below! 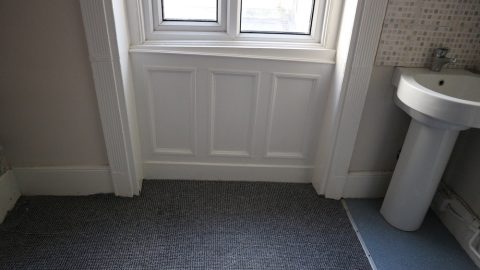 We knew that the roof had issues but it had 2 pitches and one loft was not accessible. The roof slates had been covered with asphalt and bitumen so we were aware this needed work. We also knew that the valley between the roofs was leaking – this turned out to be in line with the spine wall drop, where water was now pooling as the problem was never addressed. The leak had taken its toll on the wall plate and structural stud below, so all the rotten timber needs cutting out.

All the rafters have rotted at the ends and nails rusted away; probably due to a mixture of age and condensation from the asphalt over the original slate roof stopping it breathing. As a short term measure, battens have been added to keep things in place! The ridge has gone in line with the spine drop. So…lots to be added in to make it safe and usable. 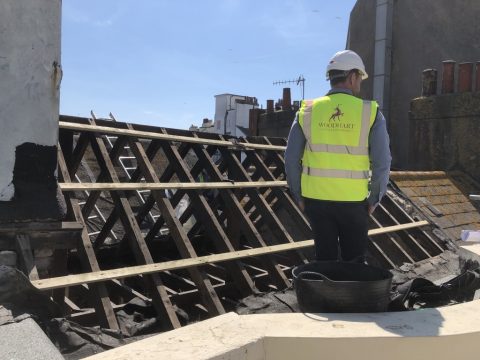 Under the roof and the rear of the building things get worse. Most of the lime mortar has been washed out in the top floor by years of neglect, being open to the elements and ensuites venting into the chimneys. 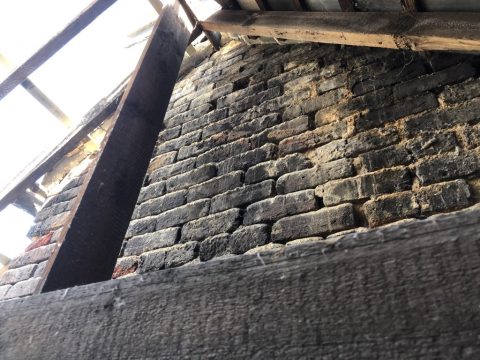 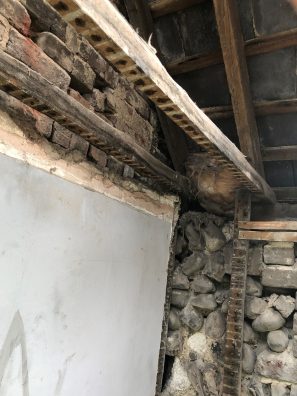 Bungaroosh panels of the rear walls have no toothing into the brickwork and we can see a visible gap to the wall (partly where the external crack is and more signs that the building dropped).

To give you an idea of what the lime is like check out this video below:

Now we have opened up the building even more, we have found that the floor timbers are all different and will not take the new imposed loads under current building regulations. The structural studs are holding up ok, but the heads of the walls have come out of their pockets in the wall, again showing that the spine of the building has dropped. 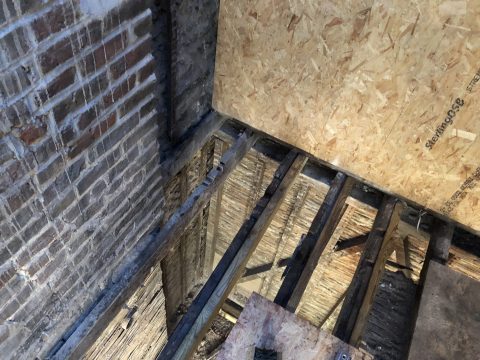 How about this for the end of usable life? All the flat roofs are well beyond economic repair and have leaked water into the timber frame structure. These will be renewed and rebuilt with something more in keeping with the historic nature of the building (not asphalt and glass reinforced plastic (GRP)!). 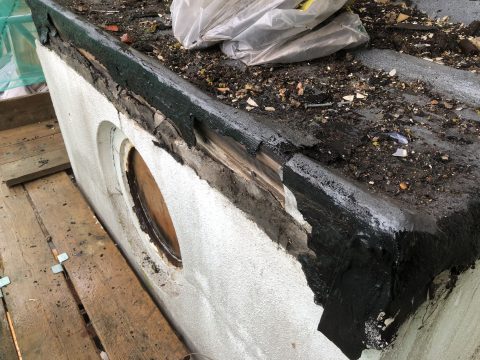 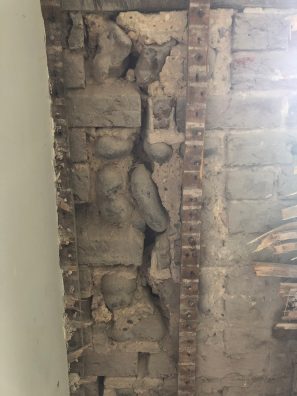 The site team opened up the next floor down today to find an even bigger crack. More stitching back together required!

Just had a call from site. The extension from the 1800s to the rear of the building at 2nd floor level is not toothed into the building (photos to follow).

So, this is the latest curveball on site. The rear first and second floors were not toothed into the brickwork and were self-supporting. Yes, the wall wobbled! It was only the roof timbers stopping it from collapsing down into the courtyard! Easy to see now why the room was cold and mouldy. In addition, due to the water ingress, the timbers in this section are all rotten so we have to do some rebuilding!

Elsewhere in the building we now have a roof and are nearing watertight (until all the new windows come).

As work has continued we’ve found that the chimneys are in a worse state than originally thought. We took the tops off, to repair around the stacks where previous strapping had blown (causing the bricks to crack), to find that the mortar had all but disappeared within the joints. So, more lime mortar and roman cement required.  We also found the flue dividers were in a very poor state of repair – not toothed in, cracked or just plain missing! 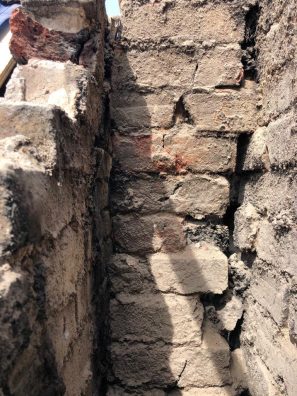 Where we are refurbishing the floors, we have opened up the bays. There are a mixture of timbers that have been repaired and replaced over the years, creating a great pattern of historic timbers of various shapes and sizes, which I have asked the structural engineer to validate (he looked at me as if I was mad (rightly so)). 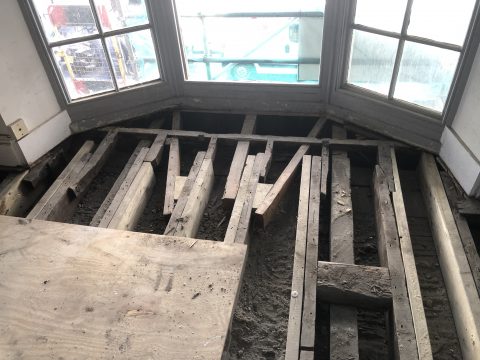 The roof to the second floor extension was pretty shot and we also knew about the hole in the wall (see 20/06/19). But what was unexpected was the state of the timber wall and floor to the rear – this has been in use on a daily basis as the site toilet, and was previously a toilet in the hotel. I am surprised that this was still standing. It is amazing how much strength rot has. 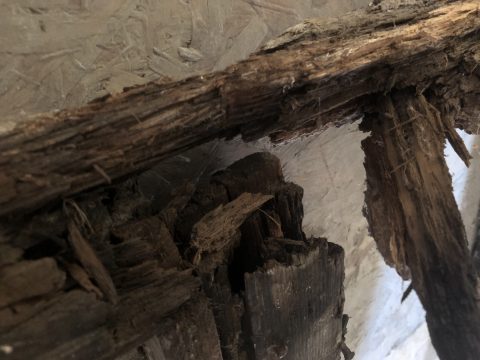 The joiner has now rebuilt this wall, as per the original with mortice and peg joints (I must add a photo of this before it gets covered up!)

The first floor plant room, which was an extension in the 1920s, is also continuing to be a can of worms. Years of notching and additional services and leaking services meant that if a joist was not rotten, it had been notched way outside its original design strength. And…you guessed it, the joists are notched into a timber that is taking the load of the floor above, and it’s rotten…! 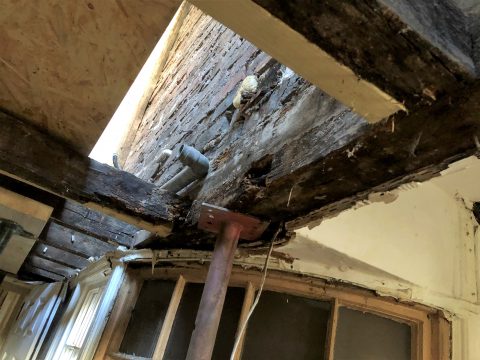 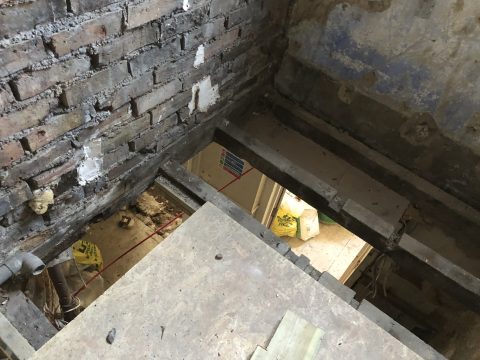 The list of defects is pretty astounding. We are now looking at bolting the chimneys back together, we have found the basement chimney has had another layer of brick put on the front of it and in the hearth (which is all coming away), and various walls are coming away from the bungaroosh. 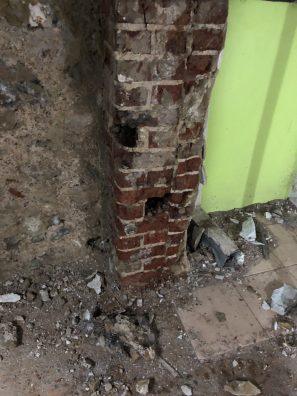 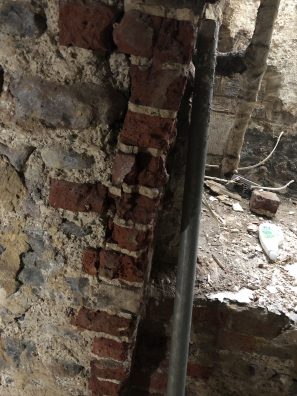 Our key concern was the cracking in the building, which we have stitched back together. Now the brickwork and bungaroosh is stable and sound, we are turning our attention back to the basement’s supports and propping in the building.  After opening up a hole in the floor and the contractor saying “it’s like digging through cornflakes”, we figured a ground bearing pressure test was required. When the trench was open we could see that a lot of the fines had been washed out on the ground, under an old lead SVP which was now running uphill in the ground. We expected no foundations, but the ground conditions mean additional works and effort in a very confined space. 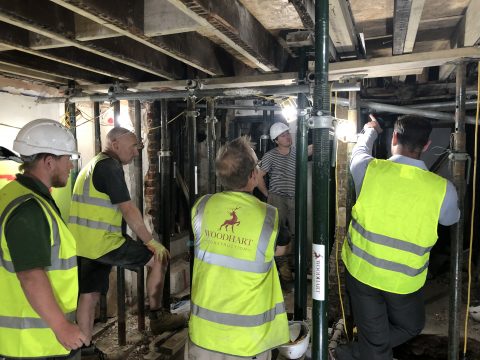 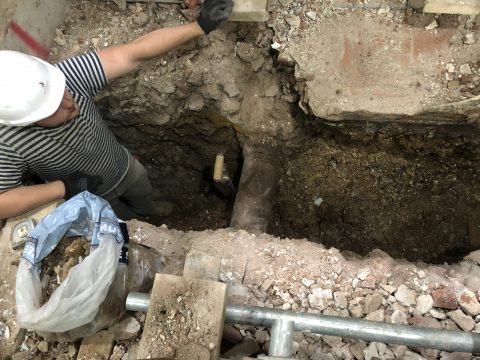 How much longer would this Listed building have remained standing? Not long is the answer. Maintenance and the right care is required for old buildings. This one has been around for 200 years…

For how it turned out check out the portfolio page here

facebook
share
twitter
share
google+
share
pinterest
share
Who Has The Information? (Part 2)
How much smart technology does one building need?
About the author
john smith
Architectural Technologist, Building Services Engineer Director at Cityzen & Lecturer at Brighton University https://www.linkedin.com/in/johnsmithcityzen/
Related Posts
02 Aug, 22 _ Listed
Listed Building?
So, you have a listed building. We explain what this means.
The comments are closed